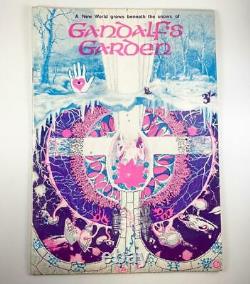 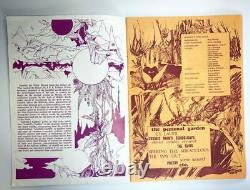 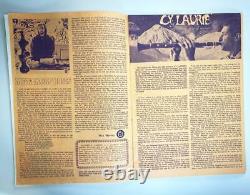 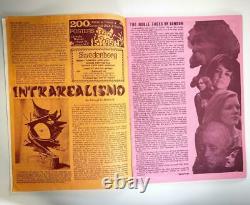 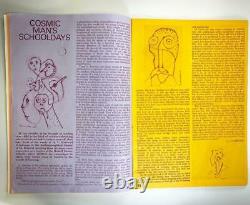 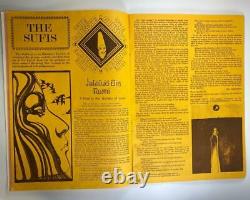 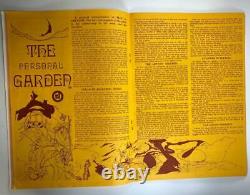 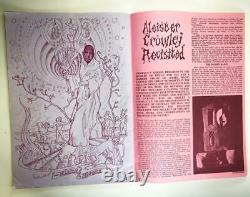 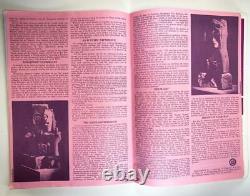 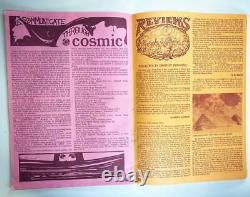 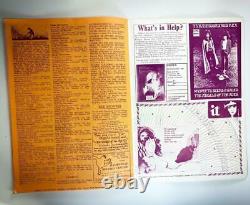 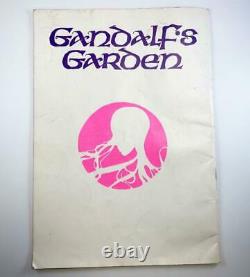 Magazine in average used condition with no significant marks, tears or defects. Very rare publication with it's heartbeat on the scene of the counterculture in early 1970's London. Illustrated card covers, printed on pastel colored sheets - colors rotating throughout the magazine, all with burgundy type. A single issue of this magazine published from 1968 to 1972 by the London mystical community of the same name. Gandalf's Garden emphasized the mystical interests of the period, and advocated meditation and psychedelics in contrast to hard drugs.

Only 6 issues were published, this being issue no. 3 which includes: "Aleister Crowley - Revisited" a four page essay published anonymously but apparently written by Muz Murray. Light rubbing to covers, else a tight, unmarked very good copy. 1970's Gandalf's Garden Issue #3.

London: Gandalf's Garden, ND (circa 1970). (8.25 x 11.75 inches). Gandalf's Garden was a mystical community which flourished at the end of the 1960s as part of the London hippie-underground movement, and ran a shop and a magazine of the same name. It emphasised the mystical interests of the period, and advocated meditation and psychedelics in contrast to hard drugs. Muz Murray (born Gilbert Murray Winfield) was prominent and editor of the magazine, and is now a world-travelling Mantra Master. GANDALF'S GARDEN is the magical garden of our inner worlds, overgrowing into the world of manifestation. GANDALF'S GARDEN is soulflow from the pens of creators - mystics, writers, artists, diggers, delvers and poets.

A wellspring of love and anguish that those with searching thirsts may drink thereof. As in the Stone Gardens of the Orient, where Soul Wizards sit within the stimulus of their own silences, contemplating the smoothness of the million pebbles, so should we seek to stimulate our own inner gardens if we are to save our Earth and ourselves from engulfment. The magazine emerged in 1968 and ran to 6 issues. It was part of the then-current Underground press (although they preferred to be called "Overground") as an alternative to the International Times and, particularly, OZ in departing from conventional black and white pages.

In contrast to the psychedelic mayhem of many issues of OZ, Gandalf's Garden magazine was lyrical in choice of, for example, peach, light blue or pastel pink sheets with burgundy type, the colours rotating through the magazine. The letters page was called the "Seedbag". A touch of satire came in the form of a page "Oh to be in England" (press cuttings). Some well-known contributors to the magazine included Christopher Logue, Adrian Mitchell, Joan Baez and Spike Milligan. Gandalf's Garden had ceased to function in London by 1972 however Muz Murray continued to be active, touring the Gandalf's Garden Seed Centres and gave inspirational talks.

The shop was based in World's End, at what was then the unfashionable end of Chelsea and a fair walk from Sloane Square tube station, passing the Chelsea Drug Store (where the record shop scene from A Clockwork Orange was filmed) and across the road from a clothes shop named "Granny Takes a Trip", distinguished by the mini car protruding from its first floor level. Gandalf's Garden was directly opposite the World's End pub.

The site is now unidentifiable under the World's End Estate. The shop promoted a peaceful "vibe" and large cushions were provided on the floor for customers to "hang out" and drink honey-flavoured exotic teas. The basement provided not only a toilet but also an area for a "shrineroom" where homeless street people crashed during the day and spiritual meetings were held every evening. It was the first popular centre to invite teachers, gurus, monks, researchers, etc. From every spiritual tradition and practice and gained worldwide recognition. Gandalf's Garden was dispersed in 1971 into various Gandalf's Garden Seed Centres in different parts of Britain, e. Edinburgh and York, holding weekly meetings of short meditation and discussion, and often speakers invited from the list of address of Muz Murray's main contacts near each Seed Centre's location. We will respond to you within 24 hours and do our best to help you out! Auctiva offers Free Image Hosting and Editing. The item "VINTAGE 1970s GANDALF'S GARDEN #3 Magazine Hippie Counter Culture OCCULT Crowley" is in sale since Sunday, October 25, 2020. This item is in the category "Books\Antiquarian & Collectible". The seller is "dawnofjupiter" and is located in Swannanoa, North Carolina.