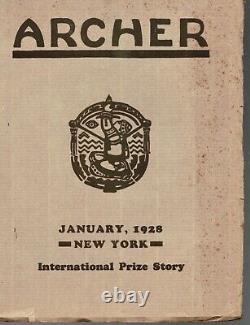 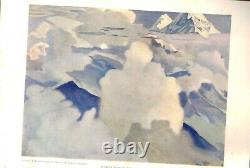 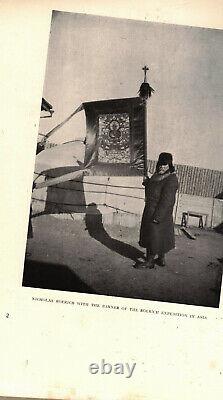 OFFERED HERE is an ULTRA RARE first edition from 1928. A copy of Archer from January 1928, a publication of the Society of the Friends of (Nicholas) Roerich Museum in New York. Sized 11x9 inches, 68 pages.

Bound in the original paper wraps. Includes a color print of White and Heavenly by Nicholas Roerich.

And many black and white pictures, including one of Roerich himself. A note inside describes this as the Second issue of the Archer. Note that the Table of Contents lists 9 separate pieces by Nicholas Roerich, including travel pieces (From Karakoram to Kotan), poetry, a piece on a Tibetan Lama, etc. Try to find another copy. The Roerich museum on 107th St.

Nicholas Roerich (October 9, 1874 - December 13, 1947), also known also as Nikolai Konstantinovich Rerikh, was a Russian painter, writer, archaeologist, theosophist, philosopher, and public figure. In his youth he was influenced by Russian Symbolism, a movement in Russian society centered on the spiritual. He was interested in hypnosis and other spiritual practices and his paintings are said to have hypnotic expression. Born in Saint Petersburg, to a well-to-do notary public Baltic German father and to a Russian mother, Roerich lived in various places in the world until his death in Naggar, Himachal Pradesh, India.

Trained as an artist and a lawyer, his main interests were literature, philosophy, archaeology, and especially art. Roerich was a dedicated activist for the cause of preserving art and architecture during times of war. He was nominated several times to the longlist for the Nobel Peace Prize. The so-called Roerich Pact was signed into law by the United States and most other nations of the Pan-American Union in April 1935. This item is in the category "Books & Magazines\Antiquarian & Collectible".

The seller is "antiquebookcentral" and is located in this country: US. This item can be shipped worldwide.