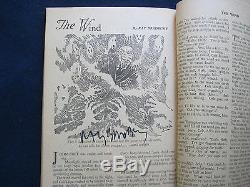 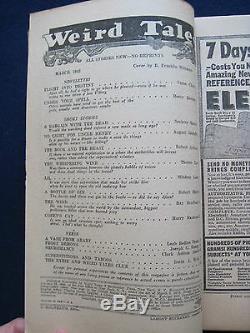 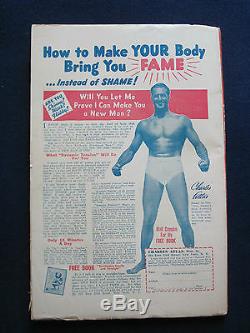 Original Weird Tales Magazine dated March, 1943 with an 8 page short story The Wind signed by the author Ray Bradbury in black felt pen at its appearance on page 106. The Wind was Bradburys first individual appearance in Weird Tales and his story is described at the contents page: He was tracked across the world by the damnedest, biggest prehistoric killer that ever haunted prey. Very good slightly used attractive copy with the usual tanning of pages and a few tiny tears.

With a bright illustration on the front cover for the featured story Flight Into Destiny by Verne Chute of a Viking warrior holding a beautiful woman in one hand and a long spear in the other as a modern pilot stands outside of his plane looking up at them. Other author featured in this issue include Henry Kuttner, August Derleth, Robert Bloch, Seabury Quinn, and Clark Ashton Smith. The item "THE WIND SIGNED by RAY BRADBURY His First WEIRD TALES MAGAZINE Appearance 1943" is in sale since Monday, July 25, 2016. This item is in the category "Books\Antiquarian & Collectible".