The American Museum, September 1787 First Magazine Printing of US Constitution 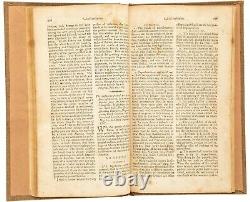 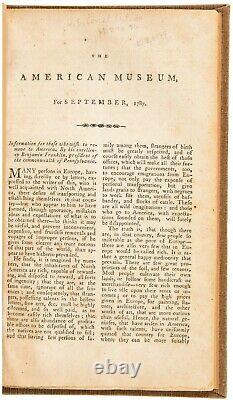 CONSTITUTION OF THE UNITED STATES. Philadelphia: Mathew Carey, September 1787. First edition in magazine and periodical form; measures 8.25 by 5 inches; part of volume II only; pages [211] through 312; text in double columns; modern brown cloth; red leather label vertically lettered in gilt with a smooth spine ruled in gilt at the top and bottom; red and brown modern endpapers; and in very good condition with the edges trimmed, pencil notations to page [211], toning and minor edgewear to the text block, and foxing throughout.

THE CONSTITUTION OF THE UNITED STATES PUBLISHED IN. BY MATHEW CAREY IN PHILADELPHIA IN SEPTEMBER 1787. Contained the first magazine and periodical printing of the United States Constitution. (the other primary American magazine of the period) also printed the Constitution in September 1787. Proceeded that printing by two days. It contains the full text of the Constitution as passed by the Constitutional Convention in Philadelphia on September 17, 1787. An exceptional and important printing of the oldest continuing charter of government in the world as first presented to the public. THE FIRST MAGAZINE AND PERIODICAL PRINTING OF THE UNITED STATES CONSTITUTION, HISTORIANS HAVE GIVEN PRIORITY TO. Was published monthly in Philadelphia from January 1787 to December 1792 by Mathew Carey, Benjamin Franklin's successor. It was the most comprehensive American magazine of the 18th century printing political tracts, foreign correspondence, news, and poetry and prose. George Washington said of it, That a more useful literary plan has never been undertaken in America, or one deserving of public encouragement. Had many important contributors, including Alexander Hamilton and John Jay. Early Printing of the U. This item is in the category "Books & Magazines\Antiquarian & Collectible".

The seller is "grayautographs" and is located in this country: US. This item can be shipped worldwide.