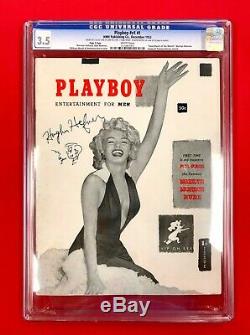 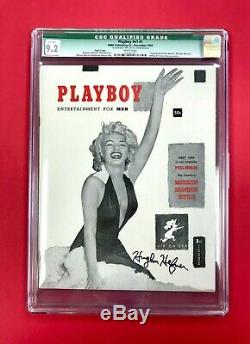 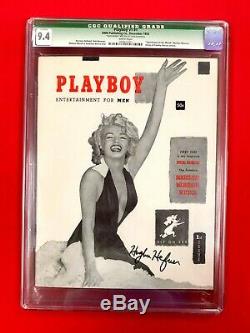 The 9.4 & 9.2 Hugh M. Hefner #1 PLAYBOYS are the Highest CGC Graded Hef-Autographed Original #1 PLAYBOYS with WHITE Pages in the WORLD!

The CGC 3.5 #1 PLAYBOY TWICE Hugh M. Hefner Signed & TWICE Hugh M. Hefner Caricatured ("Goo Heffer" - what Hef called himself in high school - self-portrait on the front cover and pipe-smoking bunny inside on page 3) was originally owned by the man who is credited with giving PLAYBOY its name, Eldon Sellers. He was there, literally in the room, when Hugh Hefner and Millie Hefner (Hef's first wife) were in the process of creating this iconic publication. Hef wanted to use Stag or Stag Party but both those names were already taken.

Eldon remembered his mother talking about an automobile called "Playboy" and suggested that name. Hef liked it and the rest, as they say, is history! Another rather intriguing fact in this saga is that Eldon gave this magazine to his former wife, Jane Borson Sellers, who just happened to be Hef's lifelong friend dating back to their high school days together in Chicago in the 1940s until their deaths, a month apart, in 2017. The CGC label for this PLAYBOY has written on it, "FROM THE COLLECTION OF JANE SELLERS, " something I have never seen on any of the thousands of CGC PLAYBOYS examined over the past 11 years that CGC has been grading PLAYBOYS. #:1241051011 (WHITE Pages) "PAGE 3" Edition.

#:1570887001 (WHITE Pages) "PAGE 3" Edition. The CERTIFIED GUARANTY COMPANY (CGC) is the world's first and largest third-party comic book and magazine grading company. If you do not believe in their grading expertise, you should not participate in this offering.

Feel free to contact me with questions, concerns or offers. Will also entertain offers for each of these #1 Playboys individually. Thanks for your time and interest & Be Well! The item "THE 3 MOST VALUABLE HUGH M.

HEFNER SIGNED ORIGINAL 1953 CGC #1 PLAYBOYS IN WORLD" is in sale since Saturday, July 18, 2020. This item is in the category "Books\Magazines". The seller is "roberts5928" and is located in Babylon, New York. This item can be shipped worldwide.