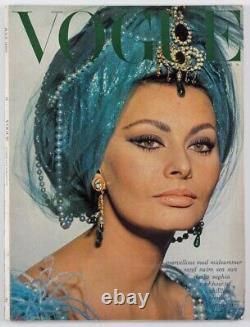 Art Kane photographs a 2 page ad for Harveys Bristols Cream (credited). PLUS beauty, fashion, celebrities, food, art, interiors and more. Fantastic advertisements from the 1960's including Dior, Revlon, Helena Rubinstein, Yardley, Coty and Goya. There are only a finite amount of these left in the world. These icon issues rarely become available to the open market. A sought after and scarce issue indeed!

We are happy to combine post. The item "Sophia Loren EGYPT Helmut Newton WARHOL Norman Parkinson SHEIKS Vogue July 1967" is in sale since Tuesday, November 17, 2020. This item is in the category "Books, Comics & Magazines\Magazines\Women's".magazines" and is located in London.