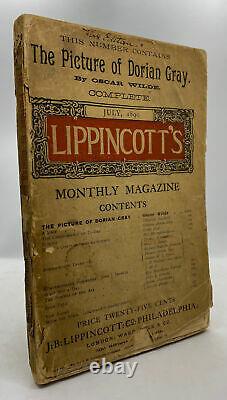 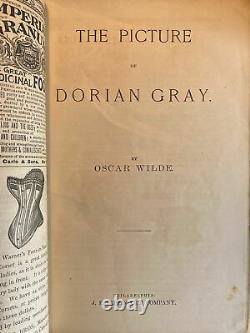 Description: First edition, American issue. Of advertisements, both before and after the main text. A nearly very good copy in the publisher's printed wraps, with some loss to the backstrip (which is printed with "The Picture of Dorian Gray by Oscar Wilde, " as issued), and a few chips to the wraps. The last leaf is creased and has a small area of loss.

Someone, rather close to the time of publication, has inked the words "first edition" at the top of the front wrap. Otherwise, it's a stiff, clean, sound example, with just a few pencil markings on the front wrap. This is the first appearance of "The Picture of Dorian Gray, " which Ahearn describes as a piracy. Though Mason (82) lists it after the UK issue, published by Ward & Lock, it is unclear which of the two was issued earlier. The magazine's publisher changed a few hundred words in the story, fearing it would be too scandalous, and Wilde revised it somewhat before the first regularly published book edition was released by Ward & Lock the next year. As this volume was published in wraps and not designed to endure, it is naturally somewhat worn, though this copy is admirably well-preserved, with no significant loss to the wraps, and the contents quite crisp and clean. An important volume in any serious collection of Wilde or Irish or British literature in general. As a small, independent bookseller in Cleveland, Ohio, I deal in general used, rare, and antiquarian books, autographs, manuscripts, pamphlets, and personal and family papers in all subjects. My family has been in the antiquarian book business since 1971. We take pride in our business and make every attempt to describe each item in our inventory accurately according to the highest standards of the rare book trade. This listing was created by Bibliopolis. The item "Oscar WILDE / Picture of Dorian Gray in Lippincott's Monthly Magazine July 1st" is in sale since Tuesday, August 31, 2021.