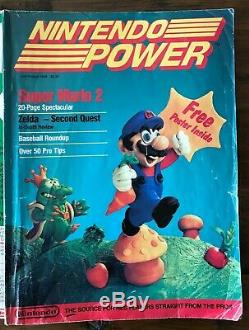 Ddress is printed on the backs of earlier issues. Later issues instead have white stick on address labels. Though there is wear, there is virtually no dirt, grime or other gross things. My parents had strict rules about washing hands and no touching stuff while eating.

Well used but not dirty or ruined. Cover worn more than rest of issue.

Pages 37-40 are removed so you can lay the second quest map out, but they are included as shown in the picture. Gear & Stuff catalog still attached. Front cover present but not attached.

Outer page is torn and tearing away from the staples. Center page has come loose from staples.

Well used but cover attached, ripped from staples a little. 14 - Cover worn, torn out of one staple. 16 - Cover worn but still held by the staples. 18 - Cover intact but not attached.

69 - Fair plus / good minus. Cover partially removed from spine.

73 - Fair plus / good minus. Page 9/10 came out of the binding but is present but worn on the edges. All Killer Instinct pages were removed to faciliate playing the game : But they are all present albeit worn. Looks good except missing back cover.