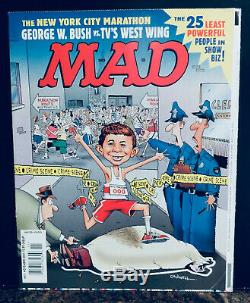 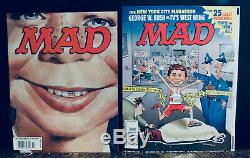 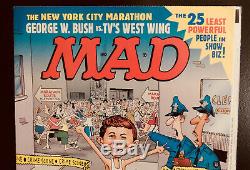 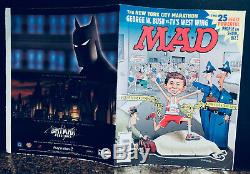 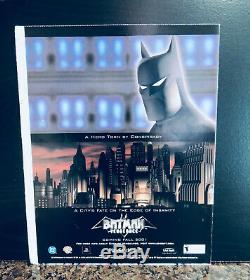 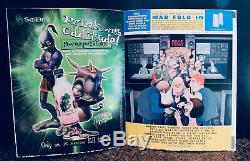 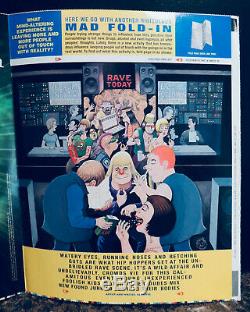 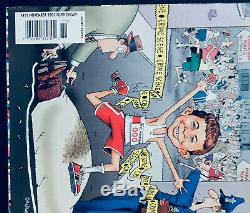 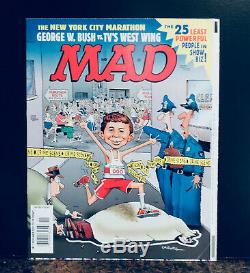 Rarest MAD cover in existence.. 1 of 3 known to exist! MAD Magazine #411 Original John Caldwell Cover pulled due to the 9/11 tragedy. You are looking at the complete original cover to MAD Magazine #411. It was pulled from release by MAD's Editors and never attached to the interior of issue #411. Use this cover to assemble the rarest issue of MAD Magazine EVER!

This cover was shredded and never released. This is one of a few that exist making it the rarest MAD Magazine cover in existence. It is the Honus Wagner card of MAD Covers! This cover was pulled because it was thought to be in bad taste due to the tragic terrorist attacks on New York CIty and the United States of America on September 11, 2001. Neuman can be seen in lower Manhattan running in the New York Marathon.

He gets lost in a New York alley and thinks the police tape, over a dead body, is the finish line. The editors deemed this unsuitable for release on the heals of the World Trade Center bombings.

The cover was pulled and replaced by the Alfred E. Neuman's face featuring the U.

Flag in his iconic gap. This cover is Fine Plus due to a small crease in bottom right hand corner. If trimmed to wrap around a copy of issue #411, the crease would be much more subtle and the cover would be a Very Fine Plus. This cover has excellent color and gloss. It is the actual printed cover and NOT A PROOF.

Only a few were sent to MAD for review. This means all four pages have the printing.

A proof would often have a blank side. There are probably fewer than ten in existence. Now that MAD has moved from New York that number may be substantially lower.

Once it was decided to reject this cover, the ENTIRE run was destroyed. Only the few sent to MAD survived. This is one of two from the MAD Magazine New York archives. Below is a statement from DC Comics on the rare MAD #411 cover.

The MAD 9-11 Cover The Untold Story. The cover of MAD # 411, which went on sale shortly after the 9-11 attack, was not the cover originally planned for that issue.

In fact, another cover was already printed and awaiting to be bound with the magazines interior pages when the attack occurred. The working title of the planned cover was The New York City Marathon and it was written and illustrated by longtime MAD contributor John Caldwell. Like the rest of the nation, we were stunned by the 9-11 attacks and it just didn't occur to us that a MAD cover showing a throng of runners racing through the canyons of downtown Manhattan, while an oblivious Alfred jumped over a dead body, could be interpreted as anything but a silly marathon gag. Fortunately, the magazines printer at the time, Quad Graphics in Wisconsin, called and asked if we were absolutely sure that was the image we wanted on the cover of MAD given the recent events. The item "MAD Magazine #411 Original Caldwell Cover pulled due to the 9/11 tragedy RARE" is in sale since Saturday, August 24, 2019.

This item is in the category "Books\Magazines". The seller is "madness6363" and is located in Plymouth, Michigan.