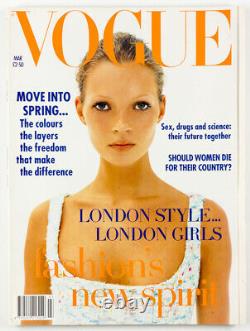 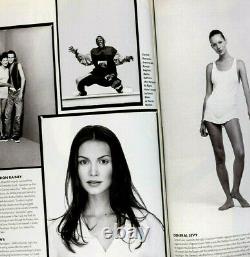 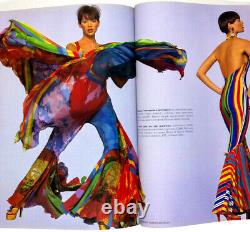 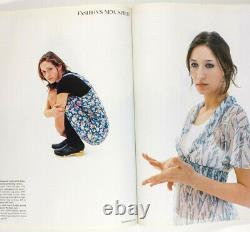 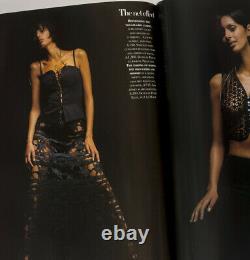 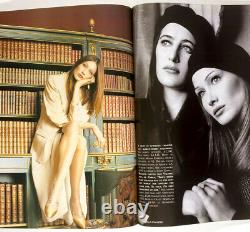 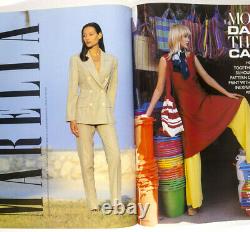 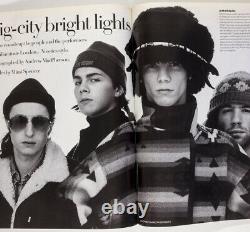 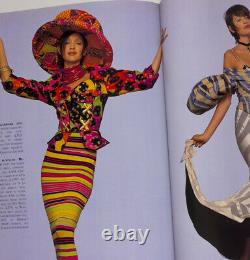 Rare issue of the British edition of Vogue magazine. This is Kate Moss' very first Vogue cover. Kate is photographed by Corinne Day, the person who discovered her (at JFK airport) and put her on the cover of the Face magazine in 1990. Alexandra Shulman's party in San Lorenzo on Beauchamp Place, to celebrate her first year as editor, is featured in the People pages, while the woolly hat is replacing the peaked cap as the most fashionable headgear around ("it's the grunge accessory", we're told): First on the bandwagon are Tara Owens, Matt Dillon in Singles, Naomi Campbell, Jane Horrocks and, for the nouveau-grunge bridgade, Dolce & Gabbana's knitted hats have a pompom your grandmother would be proud of.

She's drop her needles with fright. Plus, everyone's talking about the Seventies revival, but some people never left that era.

All good things come to those who wait: suddenly they're back in fashion: Princess Anne, Jackie Stallone, Mick Fleetwood, Farrah Fawcett and Goldie Hawn. Why is it in to look down and out?

" asks Mimi Spencer, as Nineties grunge begins to take a hold, and Jamiroquai, Saffron Burrows, Kate Moss, Mario Sorrenti, David Sims, Lisa I'Anson, Corinne Day and John Galliano are photographed by Andrew MacPherson as "the people and the performers who illuminate London... The photograph shows the magazine that you will receive.

The item "KATE MOSS 1st Vogue magazine CORINNE DAY David Sims BIBA March 1993 vtg BRITISH" is in sale since Wednesday, December 2, 2020. This item is in the category "Books, Comics & Magazines\Magazines\Women's".magazines" and is located in London. This item can be shipped worldwide.