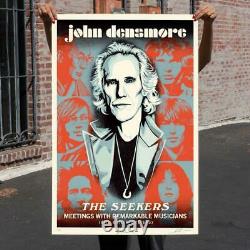 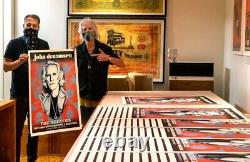 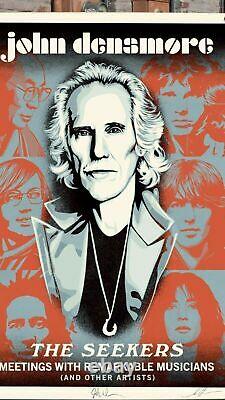 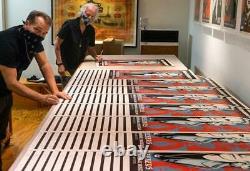 John Densmore: The Seekers--Drummer of the Legendary-THE DOORS. Offset Lithograph on thick cream Speckletone paper. Signed by Shepard Fairey and John Densmore. I was very happy that John Densmore, drummer of. Asked me to design the cover of his new book "The Seekers, " which tells the stories of his encounters with inspirational figures in his life.

All creative people have inspirations that become part of their DNA, consciously and subconsciously influencing their artistic choices and evolution. Some people try to sell the story of themselves as innate geniuses, fully formed from birth, but others acknowledge what they've learned from crucial mentors and influences along the way.

John Densmore not only acknowledges his inspirations but beautifully, powerfully, and lovingly celebrates mentors, heroes, and peers who have impacted his life's journey and become part of his DNA. While John and I discussed "The Seekers, " his respect and affection for the remarkable men and women who've brought some magic into his life made me envision a tapestry with multiple epic figures whose threads are intertwined with John Densmore himself, the central beating heart and storyteller. Of course, John as the drummer for The Doors is an iconic sage, perfectly able to hold down a book cover by himself. Still, for him it was essential for the cover to convey his generous spirit of camaraderie with those whom he has stood shoulder to shoulder with as well as those whose shoulders he has stood upon.

The item "JOHN DENSMORE THE SEEKERS SIGNED & NUMBERED LITHOGRAPH-Confirmed" is in sale since Thursday, December 10, 2020. This item is in the category "Books\Magazines". The seller is "sergeant132" and is located in Fayetteville, Georgia. This item can be shipped to United States.