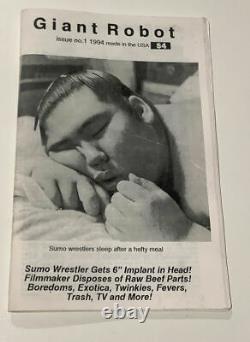 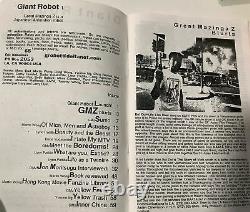 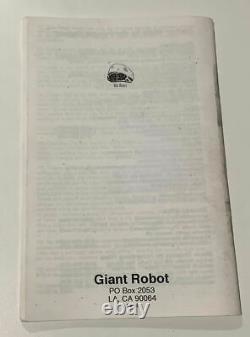 The first edition of Giant Robot which was a bimonthly magazine of Asian and Asian-American popular culture founded in Southern California in 1994. It was one of the earliest American publications to feature prominent Asian film stars such as Chow Yun-fat and Jet Li, as well as Asian musicians from indie and punk rock bands.

Its coverage later expanded into art, design, Asian-American issues, travel, and much more. Eric Nakamura and Martin Wong had met when they were both undergraduate students at the University of California, Los Angeles (UCLA), where they bonded over their shared interest in punk music and Asian pop culture.

Giant Robot was initially created as a small, punk-minded magazine that featured Asian pop culture and Asian-American alternative culture, including such varied subject matter as history, art, music, film, books, toys, technology, food, and skateboarding. The publication grew from its original format-a small, photocopied zine, folded and stapled by hand-to its eventual full-color format. This item is in the category "Books & Magazines\Magazines". The seller is "thricetoldtales" and is located in this country: US. This item can be shipped to United States.