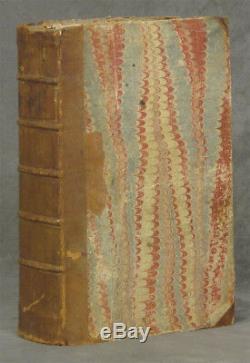 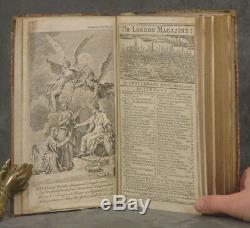 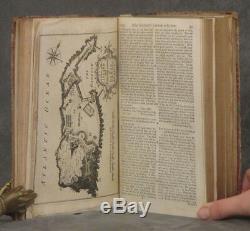 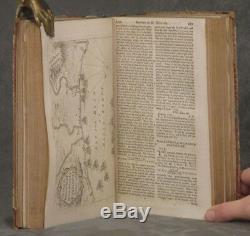 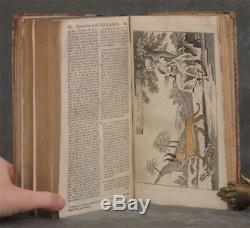 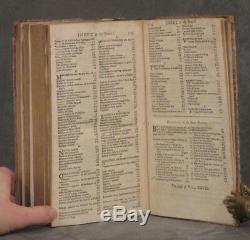 1759, in early or original half brown calf and marbled boards, 730 pp, index, with 27 of 28 plates as called for by the binder's directions; lacking only the map of the'seat of war in the empire of Germany' supposed to be at p. Otherwise very good, with all plates present including folding charts, frontispiece, etc. Light rubbing to binding and lacking spine label.

Significant to Pittsburghers for having the first published map of the city of Pittsburgh named as Pittsburgh in the January 1759 issue (a 4 x 4 inch woodcut vignette map); in late November, the French, who occupied Pittsburgh and had built Fort DuQuesne, came under attack from the British General John Forbes and his forces and set fire to their own fort and fled. The fort was rebuilt quickly and renamed Fort Pitt and the settlement surrounding the fort dubbed Pittsburgh, both in honor of William Pitt, the Earl of Chatham. News reached London quickly and this is the first published map and one of the earliest published accounts of the skirmish and name change. Another version of this map appeared at the same time in Scots Magazine of similar dimensions but slightly different, and these two compete for the honor of the first published map of Pittsburgh. Rarebookstore is a long-established store specializing in used and rare books in all fields, ephemera, photography, and the occasional painting.

Please bookmark us as one of your "favorites" -- we enter new items all the time. This listing was created by Bibliopolis. The item "Fort Pitt / London Magazine or Gentleman's Monthly Intelligencer for 1759 1st ed" is in sale since Thursday, April 11, 2019. This item is in the category "Books\Antiquarian & Collectible". The seller is "rarebookstore" and is located in Pittsburgh, Pennsylvania. This item can be shipped worldwide.