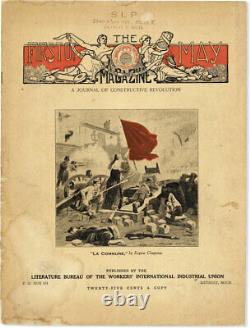 A Journal of Constructive Revolution [1919] Publication: Detroit: Literature Bureau of the Workers' International Industrial Union, 1919. The WIIU, the labor union arm of the Socialist Labor Party, was effectively formed in 1908 following the split of the SLP faction from the Industrial Workers of the World; the group identified itself as the'Detroit IWW' until 1915, at which point the name was changed to Workers International Industrial Union a typically De Leonist mouthful! The WIIU never throve; its membership probably never numbered above about 2500 workers, a number that dropped quickly following the death of Daniel De Leon in 1915.

By the 1920s the WIIU was an afterthought, and the group was finally disbanded in 1925. Contents include articles by Michael Altschuler, Herman Richter, W. Dodge, and others; literary contributions by Fred H. Hartmann, Richard Le Galienne, William Morris, and Walt Whitman; portraits and reproductions of artworks by Eugene Higgins, Jan Styka, and Eugene Chaperon.

We are one of the country's leading specialists in the history, literature and art of American social movements. Over 25,000 items in-stock in the heart of the beautiful Shenandoah Valley. Open to the public by appointment only. Our books, manuscripts and ephemera are described using AB Bookman standards - these are the standard grading terms of the trade, originally promulgated by the trade publication The Antiquarian Bookman's Weekly back in 1949. We tend to be conservative in our grading, but even the best booksellers make an occasional mistake. Thus, we offer the following guarantee: All items will be received as advertised and in the condition described. Any item is returnable for any reason within 30 days of receipt (prior notice appreciated).

This listing was created by Bibliopolis. This item is in the category "Books & Magazines\Antiquarian & Collectible". The seller is "joehillstrom" and is located in this country: US. This item can be shipped worldwide.