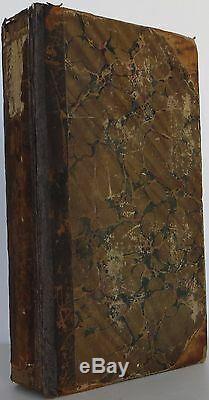 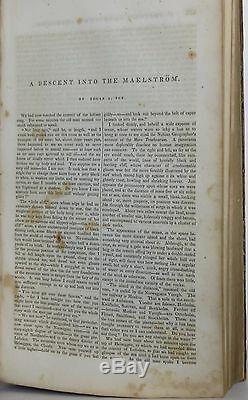 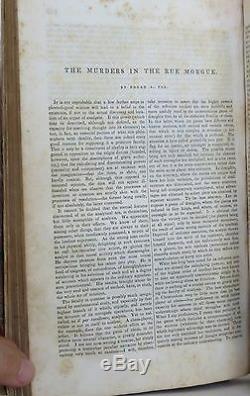 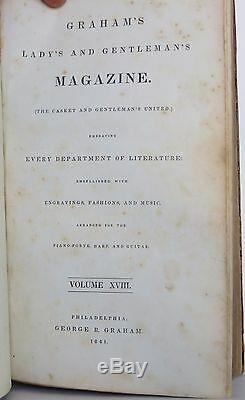 This is Graham's compilation of all of their issues (starting in February) published in 1841. The Murders starts on page 166. Two volumes in one: (Volumes 18 and 19: January-December, 1841).

Iv, [1]-295, [1]pp. And [12] engraved plates; iv, [1]-308pp. Contains the first printed appearances of: "Murders in the Rue Morgue" (considered the world's first detective story), "A Descent into the Maelstrom, " and three other Poe tales; the complete essay "Secret Writing" (in four installments), the first two parts of the essay "A Chapter on Autography, " and over 50 critical reviews by Poe. Also included are the first revised printings of the poems: "To Helen, " and Israfel. A complete run of 12 monthly issues from 1841, when Poe served as the magazine's literary editor and had reached the peak of his powers and influence both as a writer and editor. The run also includes nine mezzotints by Philadelphia's famous engraver John Sartain, one of which illustrates Poe's tale: The Island of the Fay.

A scarce and desirable annual volume. Housed in a custom-made slipcase. The item "EDGAR ALLAN POE Murders in the Rue Morgue in Graham's Magazine TRUE FIRST ED" is in sale since Thursday, September 8, 2016. This item is in the category "Books\Antiquarian & Collectible". The seller is "bookbid" and is located in Beverly Hills, California.