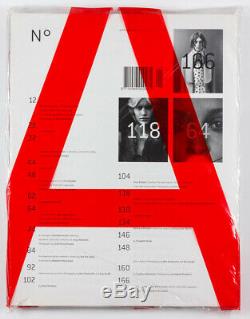 Rare launch issue of A Magazine. Scarce precursor to the magazine'A Magazine Curated By'. Published in Antwerp by Artimo & Promotie, 2001.

A Magazine, also known under the title A Magazine Curated By, is a biannual Belgian fashion magazine. It presents in each issue the work of one fashion designer, fashion group or fashion house.

This designer, group or fashion house is the guest editor of that particular issue. The design and content reflects the style and the work of the guest editor. N°A featuring Dirk Van Saene was the first issue of A Magazine, published on the initiative of Walter Van Beirendonck and designed by Paul Boudens for the Mode 2001 Landed-Geland fashion festival in Antwerp in 2001. It was followed by the issues N°B, N°C, N°D and N°E Magazines, where - in ascending order - the letters of the alphabet were used.

Edition - 1st and only Edition. Excellent condition - the photograph shows the magazine you will receive. This copy of this internationally highly sought-after magazine is perfect - it is unread and the plastic seal is still intact. We are happy to combine orders and pass on the savings to you. The item "Dirk Van Saene PETER DE POTTER A Magazine Curated By 2001 Walter Van Beirendonck" is in sale since Friday, November 22, 2019.

This item is in the category "Books, Comics & Magazines\Magazines\Urban, Lifestyle & Fashion".magazines" and is located in London. This item can be shipped worldwide.