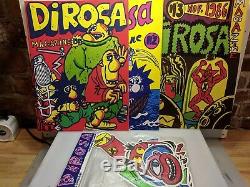 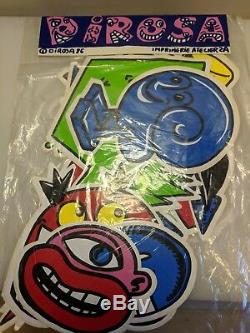 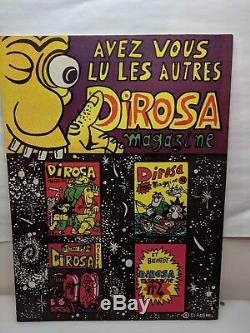 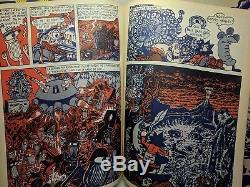 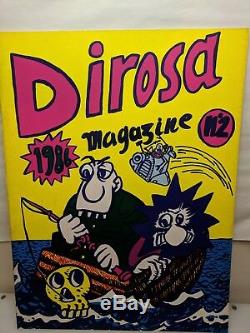 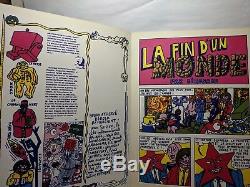 A SET of THREE (3) silk screened magazines in limited editions of 500 or 600. + a set of stickers (unopened) featuring the characters created by Hervé Di Rosa. It is a highly sought after item, as it rarely appears as a set.

Published with the help of Jean Seisser between 1985 and 1989, the Dirosa Magazine issues are emblematic of Hervé Di Rosa's work from this period. This serie of limited editions will have.

A great influence on many youngs artists from the underground graphic scene of the early 90's. Hervé Di Rosa was born in Sète (South of France) in 1959. In 1978, he left his native city for Paris where he settled down with his friend, the painter Robert Combas, In June 1981, the art critic Bernard Lamarche-Vadel displayed in his apartment a set of. Rémi Blanchard, François Boisrond, Robert Combas and Hervé Di Rosa found themselves gathered up for the first time : so was born the. If Hervé Di Rosa is actually one of its founders, he'd rather remind us today that he takes his roots from the punk scene above all, more than this 80's emblematic phrase. A movement that is actually not one, as the primary actors have never written any manifesto or claimed anything about it. Impressed by the publications of the Bazooka collective he had discovered while he was studying, his objective became to draw comic books and to see his work printed in magazines. While he thought he was drawing cartoon characters, he actually swallowed all its surrounding iconography - from the most popular to the most sophisticated - to create amazing paintings. Testifying for that period, the « Di Rosa Magazines » series (published from 1985 to 1986) would have a great influence on major artists from the contemporary graphic scene : Pakito Bolino, the founder of the Dernier Cri, as much as Blanquet who shares with him a sprawling world in constant mutation. As soon as 1993, Hervé Di Rosa undertook a never ending world tour in order to enrich his work with artistic practices from other cultures. From then on, he theorized his own artistic practice through the notion of Modest Art and founded the MIAM (International Museum of Modest Art) in Sète (South of France) in 2000.

His work is now exhibited all over the world in the most prestigious galleries and institutions, among which, the Miami Bass Museum, who produced for him an important one man show in 2006. The item "Di Rosa Magazine #1-2-3 and a set of stickers" is in sale since Thursday, March 7, 2019. This item is in the category "Books\Antiquarian & Collectible". The seller is "didierny" and is located in New York, New York. This item can be shipped to United States.