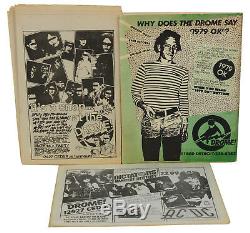 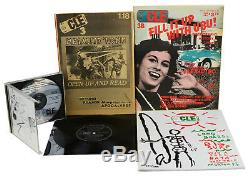 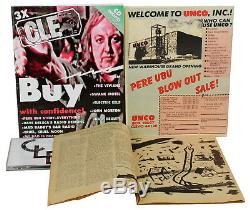 Wraps in different formats including laid-in flex-disc of issue #3B and compilation CD with #3X. The first six issues of the fanzine Nos. 1, 2, 3, 3A, 3B, and 3X. Issues generally Very Good+ or better with typical toning to early issues. Notes from the editor written on verso of rear wrap of #1 about Peter Laughner.

Scarce as a set, especially with the elusive first issue. CLE was a fanzine first published in 1977 by an eighteen-year-old college student in Cleveland, Ohio, Jim Ellis. He was inspired by Peter Laughner and the first iteration of punk bands (Electric Eels, Mirrors, and Rocket from the Tombs, which had already ceased to be) to document the new groups rising from their ashes, Dead Boys and Pere Ubu, as well as Akron oddballs Devo, Detroit's Destroy All Monsters, and CBGBs mainstays Mink Deville.

The CLE logo was detournement of Cleveland Hopkins airport luggage tags Adams p. The subsequent four issues explored the developing local scene as well as its antecedents around the world such as Peter Blegvad, The Lurkers, The Red Krayola, and The Sex Pistols. Many issues had updated mini-discographies of local bands. They grew in size and sophistication until #3B in 1981, whereupon the'zine went on an extended hiatus. Issue #3X introduced mid-'90s youngsters (such as this bookseller) to a number of by-now-classic Cleveland bands of the glory days of punk as well as to a number of area indie bands like Cruel, Cruel Moon, The Vivians, Gem, and artists in the Scat Records fold.

The compilation CD included with it is excellent. A great, thick slice of late 20th Century music is presented herein. That so much of it came from an unlikely Ohio rustbelt city is all the more impressive.

The item "CLE MAGAZINE First 6 Issues #1 3X Cleveland Punk Fanzine Jim Ellis Pere Ubu" is in sale since Monday, June 17, 2019. This item is in the category "Books\Antiquarian & Collectible". The seller is "burnsiderarebooks" and is located in Portland, Oregon. This item can be shipped worldwide.