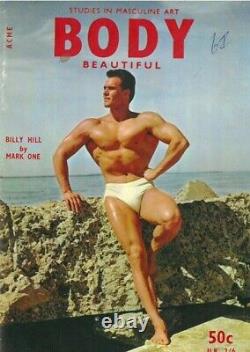 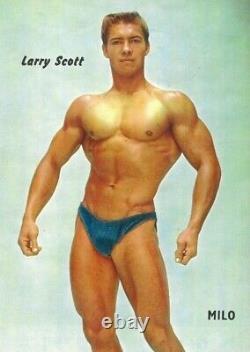 13 May 1961, British Edition, Male Classics, Vintage Beef Cake Magazine. Body Beautiful and Adonis magazines were put together by Lon Hanagan for Joe Weider of Bodybuilding fame in the 1950's. Joe Weider realized that he had a large gay following for his bodybuilding magazines (Your Physique). His magazine also has a very talented gay staff of Lon Hanagan and George Quaintance who created the first covers for Bob Mizer's Physique Pictorial magazine.

Lon created Body Beautiful as well as Adonis magazines which were first published in England and later in America. Joe Weider was a Canadian bodybuilder and entrepreneur who co-founded the International Federation of Bodybuilders (IFBB) with his brother Ben Weider.

He was also the creator of the Mr. Olympia and the Masters Olympia bodybuilding contests. These magazines had men in posing straps in softer Grecian poses rather then the hard muscle flexing that were offered in Weider's muscle magazines. In December 1945, Gay pornography pioneer Bob Mizer founded Athletic Model Guild, or AMG.

Mizer's AMG produced Physique Pictorial, the first all-nude and all-male magazine, and the film Beefcake documents his work and the growth of the Beefcake magazine industry. Lynn Womack published magazines such as Manorama, MANual, Fizeek, and Trim and was involved in the U. Supreme Court case MANual Enterprises v. From 1964 to 1967, Clark Polak published DRUM magazine. In the 1960's, the pretense of being about exercise and fitness was dropped as controls on pornography were reduced.

By the end of the decade gay pornography became legal, and the market for beefcake magazines collapsed. Young Physique magazine was a prime example of this genre. It had a centerfold with a young model wearing a posing strap (g-string) with creative sets designed by the well-known gay photographer James Bidgood.

Showing total nudity was illegal before 1962, so all models had to wear posing straps. Young homophiles in the 1960's made their first contact with the gay world. In the 1980's and 1990's, beefcake magazines enjoyed a resurgence due to a heightened interest in gym culture as well as the onset of the AIDS epidemic.

Numerous titles found success, such as Men's Workout, Exercise for Men Only, and Men's Exercise. These magazines are highly visual-oriented with extensive pictorials in contrast to fitness magazines that focus more on text such as Men's Fitness. Many of the images feature homoerotic or suggestive sexual imagery, such as male models unbuttoning their pants or almost full nudity. Some have included profiles of male strippers and some of the male models have also appeared in Playgirl.

I have been an owner of numerous gay sexual business's since 1969, one of them was the. Bijou Theater and sex club that closed in 2015. Item's based on what I paid, quality, rarity, market value. I cater to collectors, those who give gifts, those who are looking for a specific man, item, article etc. Bijou's inventory is over 35,000 magazines plus thousands of brochures etc. As a collector myself I dislike it when sellers misrepresent items their offering by making very general descriptions as Very Good, Excellent, Like New, New knowing that the items have creases, tears, rusted staples, very visible wear or just leaving defects out. This item is in the category "Books & Magazines\Magazines". The seller is "vgoodperson" and is located in this country: US. This item can be shipped to United States.