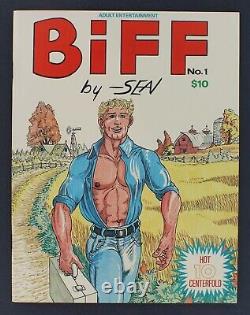 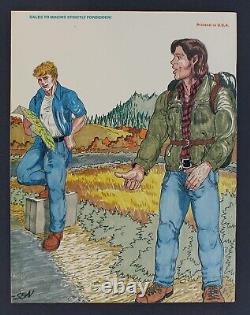 DETAILS: Original first edition,' Biff by Sean' by John Klamik, 1976, Le Salon Studio, San Francisco. BIOGRAPHY: Sean and Shawn were the pen-names of John Klamik (1935 - 2005), an American artist specializing in gay male erotica and comics. His homosexual-themed cartoons were among the first to appear in US publications, including a regular feature in the early years of The Advocate. He worked under two pen-names: Shawn for more mainstream gay publications such as In Touch, and Sean for niche publications such as Drummer. In the 1970s he did illustrations for novels and collections of short stories published by Larry Townsend, and his Leatherman's Handbook. In the mid 1974 he created stand-alone wordless comics Biff and Biff Bound for San Francisco publisher Le Salon. During this time he produced eighteen 10-page comics stories for photo-story magazines published by Nova Studios, which were reprinted in Meatmen.

In the 1980s he also did art direction for some of Nova's films and videos. In the late 1980s he produced "Up the Block", a humor comic strip set in a gay neighborhood. He is considered by many to be a pioneer in the gay civil rights movement. Oxxbridge Galleries was founded in 1987 and specializes in vintage paper items with a particular focus on counter culture materials.

We carry an extensive selection of fine art male photographs. This item is in the category "Books & Magazines\Magazines". The seller is "oxxbridgegalleries" and is located in this country: US.