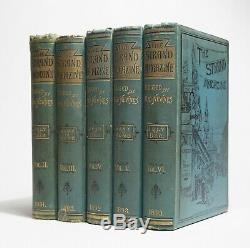 II - VI, in the original light blue cloth with the illustration in black looking down London's Strand, with the title letters suspended on telegraph wires by the Victorian artist and designer George Charles Haité. The initial cover [1891] features a corner plaque showing the name of Burleigh Street, home to the magazine's original offices. The lettering on the plaque in Haité's design was later changed [1892] when Newnes moved to the adjacent address of Southampton Street. June 1892 contain 12 short stories by Arthur Conan Doyle, these were eventually collected by Newnes and published in October 1892 as "The Adventures of Sherlock Holmes". VI [July to Dec, 1893] contain the next 12 stories culminating with'The Adventure of the Final Problem', where Doyle decided to kill off Holmes.

These were collected and published by Newnes in 1894 and published as "The Memoirs of Sherlock Holmes". However, the first London edition did not include the story,'The Cardboard Box' as it involves adultery, and was felt to be too scandalous for young readers.

All 24 stories are illustrated by Sidney Paget. Includes many first appearances of stories by writers such as Bret Harte, Walter Besant, Rudyard Kipling, Grant Allen, Dick Donovan, first English translation of Jules Verne,'Zig-Zags at the Zoo' by Arthur Morrison, translation of Sarah Bernhardt,'Towards the North Pole' by Fridtjof Nansen written especially for The Strand Magazine, along with many, many others. Covers slightly soiled and worn, repaired small tear to spine end of vol.

II, III, IV started though still tight. Overall, a very good set in the original binding containing the first serialized printings of "The Adventures of Sherlock Holmes" and "The Memoirs of Sherlock Holmes", and containing the omitted story'The Cardboard Box'. The item "ARTHUR CONAN DOYLE The Strand Magazine. Serialized Edition" is in sale since Monday, February 11, 2019.

This item is in the category "Books\Antiquarian & Collectible". The seller is "2011karol" and is located in Toronto, Ontario. This item can be shipped to Canada, United States.