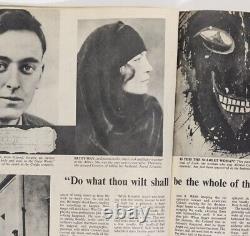 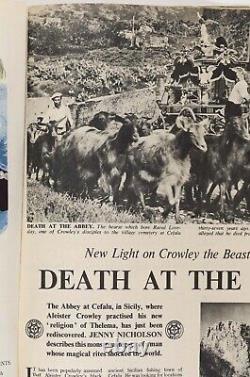 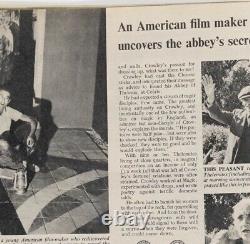 VERY rare 1950's Aleister Crowley magazine feature! Researched and written a only a few years after his death, this feature is full of Crowley photographs from his time practicing Black Magic. "The Abbey at Cefalu in Italy has been discovered".

American film maker' Kenneth Anger investigates the Abbey and is in one of the photos. Anger scraped back the concrete to find Crowley's Magic Circle as well as uncovering notes on Crowleys drug use!

The article is titled The New Light on Crowley the Beast : Death at the Abbey. Raoul Loveday's death (portrait and a photo of his funeral hearse). Photos of the local Italians who witnessed "the going-on". A painting on one of the walls which could be a portrait of the'Scarlet woman'. Crowley photos x 2 including one with his children and Leah holding a baby which "died shortly after this picture was taken".

Photograph of Kenneth Anger at the abbey : "American film-maker uncovers the Abbey's secrets". Pots and utensils in the kitchen which were used to prepare drugs. A fascinating 4 page feature! Most of the photographs were taken exclusively for this article! You will receive the full magazine which is a time capsule from 1950's Britain. One staple has disintegrated by the other staple still holds the entire magazine very securely apart from the centrespread which is unrelated to the Crowley content. Otherwise nearly pristine; colours vibrant, unmarked and clean. This item is in the category "Books, Comics & Magazines\Magazines".

magazines" and is located in this country: GB. This item can be shipped worldwide.