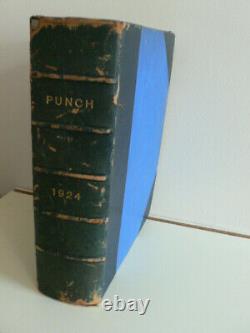 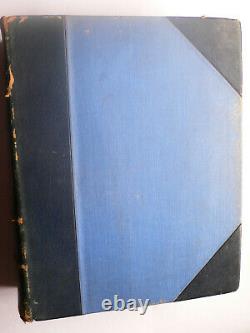 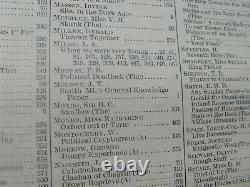 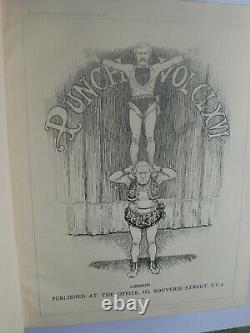 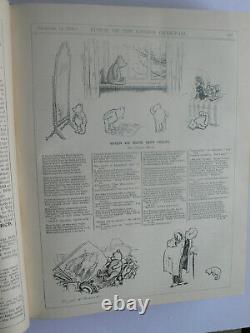 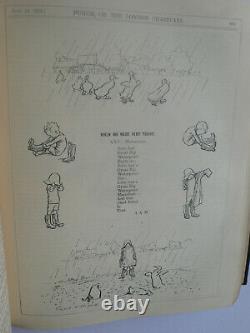 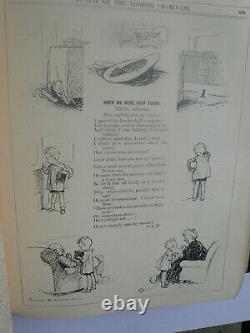 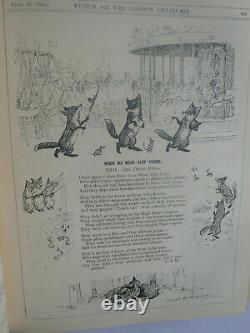 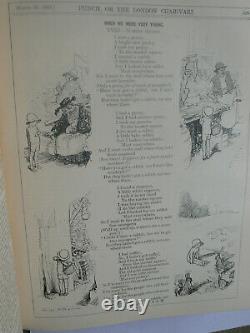 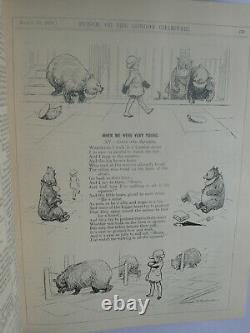 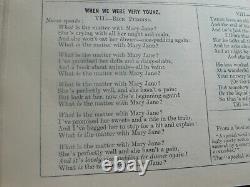 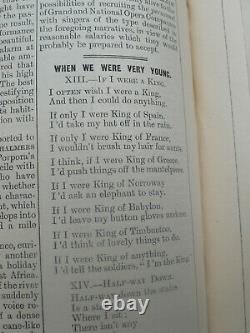 Published at The Office, London, 1924. Leather bound volume of the satirical weekly magazine Punch for 1924 containing the complete year of the magazine-Volumes 166 and 167 which cover January to June and July to December 1924 respectively. Also includes the Almanack for 1924 which was published in November 1923 and which includes several colour illustrations.

The volume is probably notable above all as it contains twenty-five of the poems from A. Milne's When We Were Very Young(including the poem Teddy Bear, the first ever appearance of the future Winnie-the-Pooh). The poems were published here before they were published in book form in November 1924.

This volume contains twenty-five of the forty-five poems which would later appear in the book. They are all in Volume 167 of this book which was published originally in weekly parts between January and June 1924. The reason there are only 18 page references for A.

Milne When we were very young in the index(see pictures) is because some of the pages have more than 1 poem. As well as being published here before they were published in book form this Punch edition is significant as there are also a number of differences in the text of some of the poems as they were published here and the poems that were printed in the first edition(and subsequent editions) of the book. Many of the poems are illustrated by E. Shepard though not all the poems have illustrations. Those that do the illustrations are generally bigger and the layout sometimes different to the layout of the book as the pages of this book are much larger-around 28cm in height and 22cm in width.

The book contains the following twenty-five poems from When We Were Very Young in the order they appear in Punch which is different to the order in which they appear in the book. Brownie In the Fashion Before Tea Puppy and I Disobedience The King's Breakfast Rice Pudding The Alchemist Teddy Bear Buckingham Palace At the Zoo Nursery Chairs If I Were a King Half-Way Down Lines and Squares Spring Morning Growing Up Market Square Sand-Between-the-Toes Independence Little Bo-Peep and Little Boy Blue The Three Foxes Jonathan Jo Missing Happiness. Below are listed some of the differences(probably most of them but there are also further differences in punctuation not mentioned or others that have perhaps gone unnoticed) between the poems as they were published here and the poems as they appeared in the subsequent book.

The poem If I Were a King is called If I Were King in the book with no a. Half-Way Down is not hyphenated. Puppy and I I met four Rabbits (I met some Rabbits) Teddy Bear -several differences in punctuation.

We all ran up to her. They all ran up to her. The Alchemist line 6- and he asks(he asks) At the Zoo Nocerous (nosserous) Lines and Squares Line 4 -and the big brown bears (and the masses of bears) Lines of the street(Lines in the street) Growing Up I can tie my grown-up laces(I can tie my new brown laces) Market Square Verse 4 Line 3 And I took my nuffin' From the market square And I walked on the common So I didn't go down To the market square But I walked on the common.

Sand-between-the toes I went right down to the shouting sea(I went down to the shouting sea). The Three Foxes Line 7 They ran through the woods on their little bare toeses(They ran through the woods in their little bare tootsies) They caught(But caught) Cocoanuts (coco-nuts) But they didn't wear stockings and they didn't wear sockses.

This is a huge volume and the A. Milne poems only comprise a fraction of the contents.

There are many other illustrations by E. Shepard not related to the A. Other illustrators whose works appear include Jack B. Bateman, Bernard Partridge, Charles Grave, George Morrow etc.

Authors whose work appears include E. This volume comprises around 1500 pages.

The two volumes contained in this one book contain 708 pages and 756 pages and the Almanack more than 30 pages. Dark blue half leather binding. Dark blue leather to spine area and corners with five raised bands to the spine. Lettered in gilt to the spine. Solidly bound with no hinge cracks-this is a large and very heavy book.

Some minor marking to the cloth portions. Leather has some scuffing mainly at the spine and extremities. Page edges tanned and with some light marking. Occasional tear to page edges. There are no ownership markings.

All images are of the actual item for sale. When We Were Very Young. Shepard" is in sale since Friday, April 2, 2021. This item is in the category "Books, Comics & Magazines\Antiquarian & Collectable".

The seller is "christopherbooks" and is located in East Midlands. This item can be shipped to United Kingdom, United States, Australia.