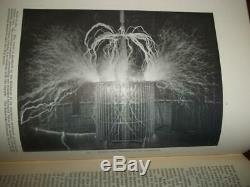 1900 NIKOLA TESLA JUNE CENTURY MAGAZINE THE PROBLEM OF INCREASING HUMAN ENERGY. BOUND VOLUME 6 ISSUES MAY 1900 TO OCTOBER 1900 The first publication of Nikola Tesla's photographically illustrated work "The Problem of Increasing Human Energy, With Special Reference to the Harnessing of the Sun's Energy" and with "Illustrated by the Writer's Electrical Experiments, Now First Published" stated both immediately under his name at head of title and in the table of contents.

Large 8vo (9-5/8 inches tall), pp. LX, 960 Pages illustrated throughout. BOUND VOLUME WITH Six consecutive issues. The Century Illustrated Monthly Magazine, June 1900 Vol. First Edition This VOLUME CONTAINS THE rare June, 1900 issue of "The Century Illustrated Monthly Magazine" that features the 1st appearance of Nikola Tesla's famous article THE PROBLEM OF INCREASING HUMAN ENERGY, With Special Reference to the Harnessing of the Sun's Energy. The article is 37 pages long and features many iconic photographs of his experiments. Tesla had an agreement with the editor of The Century Magazine to produce an article on his findings.

The magazine sent a photographer to Colorado to photograph the work being done there. The classic article, titled "The Problem of Increasing Human Energy", appeared in the June, 1900 edition of the magazine. He explained the superiority of the wireless system he envisioned but the article was more of a lengthy philosophical treatise than an understandable scientific description of his work illustrated with what were to become iconic images of Tesla and his Colorado Springs experiments. The Century Illustrated Monthly Magazine-Vol.

1900 Increasing Human Energy Tesla, Nikola; John Burroughs; Booker T. Washington; Ernest Seton-Thompson; New York / London The Century Co. THIS BOUND VOLUME IS COMPLETE CLEAN AND IN VERY GOOD CONDITION.... PLEASE VIEW MY OTHER NIKOLA TESLA ITEMS THAT I HAVE LISTED.... The Problem of Increasing Human Energy, With Special References To The Harnessing Of The Sun's Energy.

By Nikola Tesla Century Illustrated Magazine, June 1900 THE ONWARD MOVEMENT OF MANTHE ENERGY OF THE MOVEMENTTHE THREE WAYS OF INCREASING HUMAN ENERGY. Of all the endless variety of phenomena which nature presents to our senses, there is none that fills our minds with greater wonder than that inconceivably complex movement which, in its entirety, we designate as human life; Its mysterious origin is veiled in the forever impenetrable mist of the past, its character is rendered incomprehensible by its infinite intricacy, and its destination is hidden in the unfathomable depths of the future. Are the great questions which the sages of all times have endeavored to answer. Modern science says: The sun is the past, the earth is the present, the moon is the future.

From an incandescent mass we have originated, and into a frozen mass we shall turn. Merciless is the law of nature, and rapidly and irresistibly we are drawn to our doom.

Lord Kelvin, in his profound meditations, allows us only a short span of life, something like six million years, after which time the suns bright light will have ceased to shine, and its life giving heat will have ebbed away, and our own earth will be a lump of ice, hurrying on through the eternal night. But do not let us despair. There will still be left upon it a glimmering spark of life, and there will be a chance to kindle a new fire on some distant star. This wonderful possibility seems, indeed, to exist, judging from Professor Dewar's beautiful experiments with liquid air, which show that germs of organic life are not destroyed by cold, no matter how intense; consequently they may be transmitted through the interstellar space. Meanwhile the cheering lights of science and art, ever increasing in intensity, illuminate our path, and marvels they disclose, and the enjoyments they offer, make us measurably forgetful of the gloomy future.

Though we may never be able to comprehend human life, we know certainly that it is a movement, of whatever nature it be. The existence of movement unavoidably implies a body which is being moved and a force which is moving it. Hence, wherever there is life, there is a mass moved by a force. All mass possesses inertia, all force tends to persist. Owing to this universal property and condition, a body, be it at rest or in motion, tends to remain in the same state, and a force, manifesting itself anywhere and through whatever cause, produces an equivalent opposing force, and as an absolute necessity of this it follows that every movement in nature must be rhythmical.

Long ago this simple truth was clearly pointed out by Herbert Spencer, who arrived at it through a somewhat different process of reasoning. It is borne out in everything we perceivein the movement of a planet, in the surging and ebbing of the tide, in the reverberations of the air, the swinging of a pendulum, the oscillations of an electric current, and in the infinitely varied phenomena of organic life. Does not the whole of human life attest to it?

Birth, growth, old age, and death of an individual, family, race, or nation, what is it all but a rhythm? All life-manifestation, then, even in its most intricate form, as exemplified in man, however involved and inscrutable, is only a movement, to which the same general laws of movement which govern throughout the physical universe must be applicable. THIS IS A VERY SCARCE AND HARD TO FIND BOOK... Get Supersized Images & Free Image Hosting. Create your brand with Auctiva's. Attention Sellers - Get Templates Image Hosting, Scheduling at Auctiva. The item "1900 NIKOLA TESLA JUNE CENTURY MAGAZINE THE PROBLEM OF INCREASING HUMAN ENERGY" is in sale since Saturday, February 8, 2020. This item is in the category "Books\Antiquarian & Collectible".