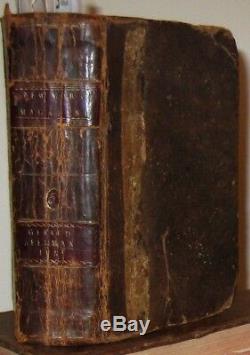 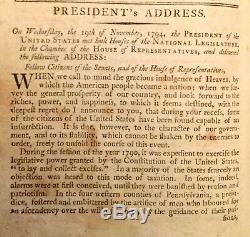 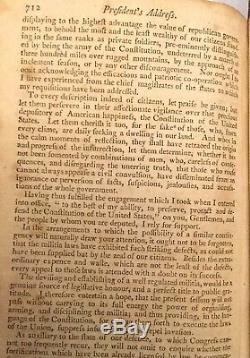 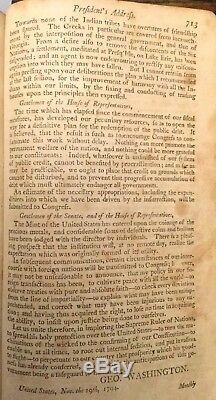 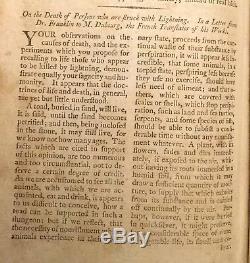 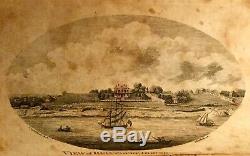 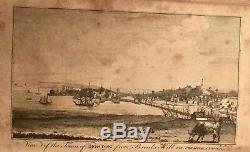 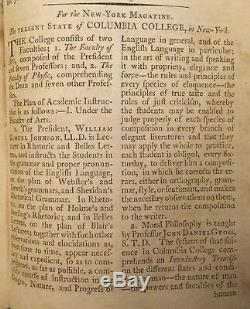 To every description indeed of citizens, let praise be given; but let them persevere in their affectionate vigilance over that precious depository of American happiness, the Constitution of the United States. Let them cherish it too, for the sake of those, who, from every clime, are daily seeking a dwelling in our land. And when in the calm moments of reflection, they shall have retraced the origin and progress of the insurrection, let them determine, whether it has not been fomented by combinations of men, who, careless of consequences, and disregarding the unerring truth, that those who rouse cannot always appease a civil convulsion, have disseminated from an ignorance or perversion of the facts, suspicious, jealousies, and accusations of the whole government... And to verify the anticipations of this government being a safeguard to human rights.

Original and exceedingly rare 1794 volume, January - December. Mott (in A History of American Magazines) described The New-York Magazine as one of the most important post-Revolution magazines. " Spine has two labels, top is title and bottom states: "Gerard Beekman. The Beekmans were one of New York's most prominent families Beekman Place, &c.

, heavily involved in early New York and American history. He graduated from Columbia College (like many other Beekmans).

This volume has a long meaty article on Columbia College (established in 1754, as King's College) - The Present State of Columbia College , regarding professors, courses, anatomy, science, more. Also signed inside covers by one A. Embree of Tarrytown (there is an Embree Street in Tarrytown today). Other contents include a Proclamation by Washington; a wonderful address by Washington ; Gen.

Nathaniel Greene; Governor Clinton; New York Chamber of Commerce; Robert Livingston; Benjamin Franklin comes up a few times - a eulogy (about 4pp), as well as a letter of his concerning lightning & electricity. Also, The Mint; Whale Fishery on the West Coast; Description of the Falls of Niagara; a fair amount on The Plague; Yellow Fever; Whooping Cough ; The Pelew Islands; The Potomac River and the City of Washington; Change of Climate in the Middle States of North America; Joseph Priestly; Account of the Japanese; Fourth of July; Hamilton Oneida Academy; Count de Benyowsky; Gen. Anthony Wayne, Defeat of the Indians; Of Boxing; &c. Early engravings, a few with color, of New York, New Jersey (Minisink, a View of Bergen, A View at Pahaquarrie, Sussex County,), Boston, and Philadelphia (a Theater).

Leather spine over paper boards, heavily worn. Inside, much toning, browning and staining, some tearing, much wear throughout, a few pages missing one leaf - p. 206 and more missing at end of volume, ends, abruptly, at p.

Soon after Washington's beautiful uplifting address to the nation comes an engraving of Saratoga NY, with a small black boy serving leisurely white adults. This scarce book is not in pristine condition but it is hard to come by a full volume in any condition and single months sell for thousands dollars apiece. Terrific New York history, rare Americana. The item "1794 NEW YORK MAGAZINE GEORGE WASHINGTON BENJAMIN FRANKLIN CONSTITUTION PLATES" is in sale since Monday, December 3, 2018.

This item is in the category "Books\Antiquarian & Collectible". The seller is "philenor" and is located in Jamaica, Vermont. This item can be shipped to North, South, or Latin America, United Kingdom, Germany, Japan, France, Australia.