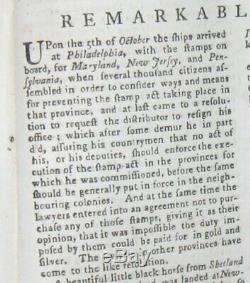 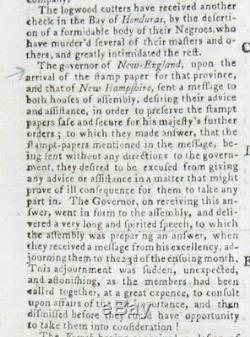 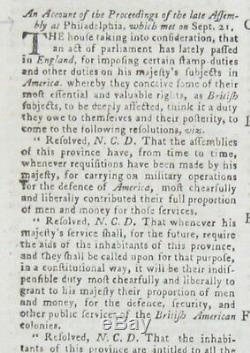 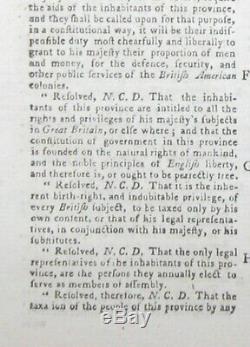 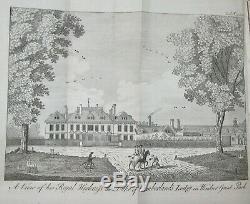 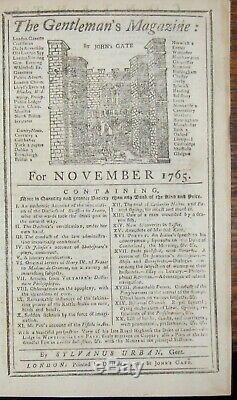 Upon the 5th of October the ships arrived at Philadelphia, with the stamps on board, for Maryland, New Jersey, Pennsylvania, when several thousand citizens assembled in order to consider ways and means for preventing the stamp act from taking place in that province, and at last came to a resolution to request the distributor to resign his office; which after some demur he in part did, assuring his countrymen that no act of his, or his deputies, should enforce the execution of the stamp act in the provinces for which he was comissioned, before the same should be generally put in force in the neighboring colonies.... Original 1765 issue with substantial news regarding the American colonies and the Stamp Act, a major spark to the entirety of the Revolutionary War with its clarion call of no taxation without representation. Other contents include: Inoculation, Samllpox; Mr. Johnson's Account of Shakespeare's Plays; Original Letters of Henry IVth of France; Observations on Apoplexies; Fascinating Power of Rattlesnakes; Fistulas in Ano. Account of the Trial of Catherine Nairne & Patrick Ogilvy, for Incest & Murder; Accident from grasping a Sea-Dragon; &c.

Spine is somewhat rough, clean and easy to read within, one of two engravings (nice one of Windsor Great Park). Extensive and historic Stamp Act content, quite something. The item "1765 GENTLEMAN'S MAGAZINE STAMP ACT November NO TAXATION WITHOUT REPRESENTATION" is in sale since Friday, January 3, 2020. This item is in the category "Books\Antiquarian & Collectible". The seller is "philenor" and is located in Jamaica, Vermont.